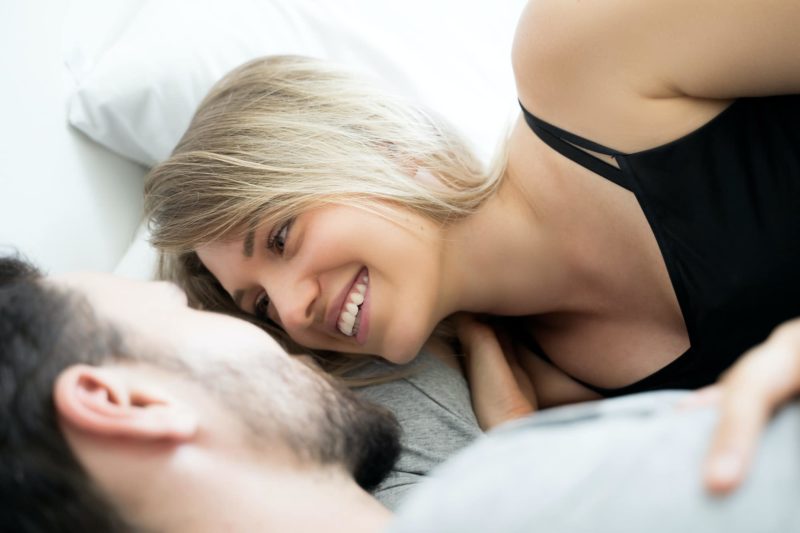 I remember back in my early 20’s when I first started frequenting clubs and bars.

With a group of good friends, we’d “pre-game” in the car on Vodka and Redbull or Cranberry, so that we could enter the party loosened up, and on some liquid courage.

I didn’t really feel like a 100% solid, confident man, because deep down I had a dark secret: I sucked in bed.

While I was “granted” a decent erect size, my premature ejaculation, performance anxiety, and lack of knowledge on the female orgasm made me ROUTINELY fail women in the bedroom

And while my erect size was decent, my flaccid size was very small… the definition of a “grow-er”.

So going into a club, seeing a hot-ass woman, and walking up to her like I’m Bishop Don Juan was all a phony act… I could be cool on the exterior, but when it came down to it, I knew I was just going to disappoint.

The interior didn’t match the exterior, and they felt this…

Why I Improved My Performance

One Halloween, I went out to an area in Miami that would get packed full of half-naked college chicks, and I met a sexy, little angel (literally, she was dressed as an angel).

By this time I was halfway blacked-out drunk, so I don’t remember the conversation too well, but somehow I made a good impression, she got my number, and called me out of the blue, months later.

I somewhat remembered who she was, and knew we had a special connection somehow that night… long story short, we talked on the phone, met, dated… and soon after had sex.

It was the best sex I had ever had… but not her.

She still enjoyed being with me, and hoped the sex would improve… but it didn’t.

As our relationship flowered on the outside, it was dying in the bedroom… and when it finally died in the bedroom, it took the whole deal with it.

I was heartbroken, but I knew I had to change something. I wasn’t going to let this happen again… I had to learn.

So I began to obsessively research the areas that I felt needed improving, and over time, amassed quite a bit of powerful sexual knowledge.

How to Beat Performance Anxiety

A fear that was always subconsciously in my mind when talking to a girl in the club or bar, or on a date was: “is my dick going to get up when it comes time to perform?”

I had experienced a number of times where I couldn’t get an erection due to anxiety, so already had a minor concern over it. Throw in some alcohol and cigarettes, and it made the slope all the more slippery.

I oftentimes sabotaged sexual situations with a woman because I felt I was too messed up to function correctly… but in most cases, it was the anxiety, more than the liquor getting in the way.

Some tips to be a more “solid” man when it counts:

-Pace yourself with the drinking; and mix in some water. Limit or eliminate cigarettes.

-Get her hand and place it on your penis or testicles, while you use her body to turn yourself on… nothing wrong with a little physical stimulation.

-Accept you’re anxious… it’s normal to be nervous before sex, especially with someone new. We’re only human. Accept the anxiety; it will weaken its power over you and allow you to work through it.
-Don’t take things so seriously! Sex is supposed to be fun and pleasurable, not a life-or-death test of your manhood.

Once you overcome psychological ED, you won’t have to press the brakes when working on seducing a woman…

You can “work” full speed into getting her into your bed (or getting her number, or taking her out to eat – whatever your methods may be), and she will be drawn to your strength and confidence!

Increasing Your Flaccid Size Will Impress On the Dancefloor

Having a small flaccid penis in the club became a strange complex of mine… women do sometimes “feel up your situation” with their body while dancing with you, and I would be very self-conscious about this.

Luckily, with some manual penis enlargement techniques (yes, they do work), I now have a much larger, hanging flaccid penis.

Penis enlargement routines abound on the internet, so take a look around. I myself have researched on it quite a bit over the years, and have developed a routine that has worked very well for me.

On another note, you can also try penis pumps

Talk about a confidence boost!

Lasting Long Enough to Get the Job Done

Perhaps the biggest problem I had… and one of the biggest reasons holding me back from being a real “ladies’ man” in my early adulthood: terrible premature ejaculation, and complete ignorance on how to properly penetrate a woman ’til orgasm.

I didn’t even know where the clit was, how to stimulate it, or how important it was for a woman’s orgasm!

With this track record, how confident do you think I was while talking to the sexy, big-booty Dominican vixen ordering up her Cosmo? Not confident at all… so she’d give me the ol’ “I got a boyfriend…”

As to lasting longer, this is what I did (and you can do the same):

–Practiced solo exercises, to train me to KNOW that I could last longer. Part of it involves stimulating/masturbating without a single arousing thought or visual, and seeing how long I could last with a clear mind… these exercises show you how much ejaculation control takes place in the mind, and you take this confidence with you during sex, and remember this “long-lasting mindstate”. Works almost like hypnosis.

–Learned the Taoist male multiple orgasm technique: Perform a strong kegel at the time of ejaculation, and it allows you to hold back ejaculation during orgasm (two separate events happening simultaneously). When you don’t ejaculate, it allows you to have an orgasm without losing your erection, and you can keep on penetrating fully hard until the next orgasm! Rinse, repeat

–Learned how to better stimulate the clitoris. With a better understanding of the clitoris, I can warm a woman up substantially before I begin penetrating (shortening the amount of time she needs to get off), and when I do begin actual intercourse, I rub hard against the clitoris with my pelvis, or base of the penis, on the in- and out-stroke. Learn the penetrative technique well, and you can actually get a woman off quickly without any foreplay!

These techniques worked for me to finally last long and make women orgasm. I know premature ejaculation can be very hard to beat in many cases, so if you need some extra help, here are some highly effective secret weapons:

–Condoms with benzocaine. Certain condoms are meant for extended pleasure and can numb you (and only you, not her… the condom keeps the numbing agent inside), allowing you to delay ejaculation and last longer.

Strong and Solid In The Bedroom?

After my rough lesson with the girl who left me because of my poor sexual performance, once I learned enough to consider myself decent in the bedroom, I began to satisfy women…

The first time back in the bedroom after a sabbatical from women, I applied all of my newfound sexual knowledge and had some rough, sweaty, long-lasting AMAZING sex with a girl I met on a night on the town.

After we finished, she told me (completely out of breath, glistening with sweat and with a shell-shocked face):

“That was the best sex I’ve ever had.”

I’ve received this same reaction, FOR YEARS NOW… and hear almost identical, if not exactly the same words.

Truth is, most men don’t know what they are doing in bed. They think they do, but they don’t. Learn to just slightly improve your performance, and you’ll be lightyears ahead of the competition in the dating pool…

And then you’ll go out knowing you are a woman SATISFIER… you will be the prize SHE has to work for… and this will make you solid, confident, and attractive to women.

David Carreras is the author of Mr. Manpower’s Guide to Overall Manhood Enhancement MisterManPower.net, an e-book filled with his sexual experiences, knowledge, and exercises gathered over the years.