Podcast 082: How To Use Rationality to Become an Unbreakable Man and Achieve Success

#1 – How to Eliminate Excuses

Most people know roughly what to do to get themselves started on the path to a better tomorrow, yet they still can’t get motivated to do it.

If you are one of those people, who can’t get motivated to get stuff done…

There are a couple of possible reasons why:

#1 Something is genuinely stopping you from “doing the thing”.

#2 Your mind came up with a completely made-up list of reasons why they can’t.

See your mind is kind of like a Nobel-prize winning inventor for reasons, why you shouldn’t do something – even if there aren’t any.

It knows you and it has every tactical advantage over you. In order to keep you static, it will make up a list of excuses for why you can’t do this or that.

I’ve compiled an entire litany of excuses you may have in your mind as you are reading this ebook.

If you and any excuse that you’ve been telling yourself on this list, don’t worry, I will also show you how to disarm it.

Let’s address them head-on before they get another chance to sabotage your dreams.

#2 – How to Eliminate Limiting Beliefs 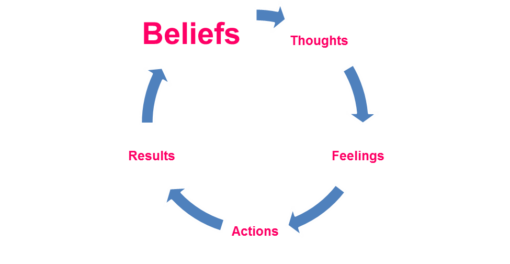 The Self Reinforcing Psycho-Cybernetic Feedback Loop

The inner working of your beliefs is one of the most important things for you to understand because beliefs dictate what is and isn’t possible for you.

I’m not going to go too deep on the mechanics of belief but, I’m going to give you bare essentials that will put you in a better position to work with your mind, instead of against it.

Once you truly understand this, you will feel like you have levers that you can simply pull in order to shift into a more powerful mindset at any time.

What you hold as true in your mind (belief), will dictate your thoughts and perceptions on a moment by moment basis.

You can visualize this as the core belief being a cloud, that then precipitates rain – the thoughts.

So if for example, you believe that money is hard to make, you are not going to have ideas or thoughts that would be conducive to making a lot of money.

Your reticular activating system (RAS), which governs your perceptions and allows you to spot opportunities, will literally black out things in your environment that are not congruent with what you hold as true in your mind.

All of those elements are always acting in alignment, once you change one variable all the others will be affected.

We are locked in that self-reinforcing loop that then sets the comfort zones for every area of our life.

If you want to introduce any meaningful change, we will have to interrupt the pattern on the level of belief because the belief is the linchpin of the whole construct.

So the question is how do you change your beliefs if you are not satisfied with the results you have in your life?

#3 – How to Audit Your Beliefs

I hope that you can see now that there is a link between what you are getting out of life and what sort of beliefs you hold.

There is only one problem.

A lot of beliefs that you currently hold are holding you back are based on limited interpretations of events you experienced in your past (especially during your childhood).

You adapted them on a first-come, first-served basis. As a kid, you had to quickly start orienting yourself in the world so whatever beliefs your parents had – you were quick to adopt those without question.

Otherwise, you would have no way to make sense of the world on your own.

Every next belief you adopted after the period of those first formative years you’ll most likely evaluate based on whether or not it is congruent with the beliefs you presently hold.

“Does this belief fit my pre-existing web of beliefs?”

If yes, then it appears to be true, if no, you are going to reject it, otherwise, you are forced to question your original assumptions about the world.

That means that the beliefs you may hold could have not as much to do with the truth but a lot to do with whether or not they t your pre-existing web of beliefs.

You’ve been holding on to and rehearsing your truth (what you believe to be true) for so long that your beliefs have become The Truth (because of the psycho-cybernetic feedback loop).

If you want lasting change in your life, you have to dig deep and investigate for yourself.

Is what I believe THE TRUTH?

Or is it just my personal truth, something I accepted years ago and rehearsed for such a long time that it became THE TRUTH for me?

That new-found level of awareness will give you the opportunity to change, to adopt new empowering beliefs while letting go of ones that keep you stationary.

Go through the list below and take a good look at each of them. Which ones do you resonate with? Are there any other beliefs that are not on that list but you feel are true to you?

Some of the beliefs you will be to identify instantly, others will take some time to come to the surface.

Once you adopt the habit of meditation it’s going to be easier to observe your self-talk as a witness when it happens. You will be able to observe the thoughts that reveal your beliefs.

If you don’t want to be stuck with faulty beliefs, that limits your potential for the rest of your life…