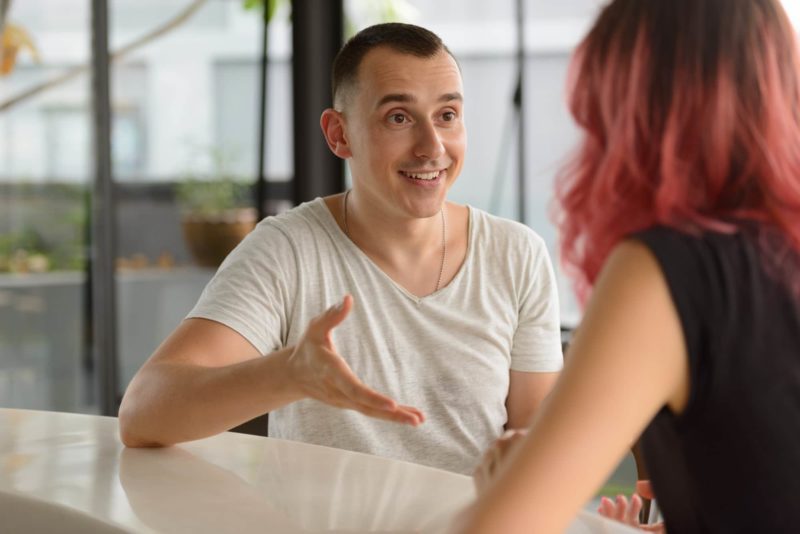 Rewind three years ago: I’m living in Madrid, Spain. I’m teaching English 16 hours a week (yes, you read that correctly) and had a ton of time and the financial independence to do pretty much whatever I wanted.

When my best friend and I moved into our apartment a few months earlier, we decided that we weren’t going to speak English with anyone. We didn’t want to get mixed up in the English teaching crowd because we wanted to improve our Spanish and make our experience as authentic as possible.

What did this actually mean? Making friends and meeting girls was that much harder. This is a tough standard to keep when you are three months into living in a new city and you don’t know anyone. To give ourselves even more incentive we didn’t bother buying wifi. If we had to use the internet we would go to cafes.

It was only a few weeks later that I realized I had to go for it.  I couldn’t sit around waiting for people to be my friends, and I definitely couldn’t just wait for girls to show up in my life.

So what did I do? I scorned tinder, so I pretty much did the only thing available to me.  I talked to girls on the street.  And I’m not just talking by the dozens. I literally talked to over 200 girls in the period of a couple of months.

Why did I do this? Obviously, I wanted to meet girls. But there was something about the challenge, about not allowing myself to use Tinder, that I needed to give myself. It was terrifying. And that’s why I needed to do it.

Lesson 1: Being Uncomfortable Is Always The Same Feeling

You might not be surprised that I also take cold showers. I’ve tried standup comedy. And I do hill sprints. What do they all have in common?

5 seconds before you do any one of those things, you are terrified, and this is exactly the same feeling I get right before talking to a girl for the first time.

Call it anxiety, call it excitement, call it butterflies. This was a revelation to me at the time: It’s all the same feeling. Once you’re able to recognize this feeling and notice when you’re responding to it, it doesn’t control you as much.

Say you’re going to talk to a cute girl for the first time.  You get nervous, your heart starts beating faster, your palms get a little sweaty.

Just stop. Take a breath. Drop into your body for a second. That story you’re telling yourself? It’s BS. What’s really going on is your defense mechanism is going up. It’s the same feeling you have right before you jump off a diving board.

By sitting with and getting more comfortable with that feeling, you can recognize when it comes up more easily. And if you can sit with it then, it won’t control you.

In fact, when you feel butterflies, it’s usually a signpost pointing in the right direction.

Lesson 2: To Stop Being Afraid Of Doing Something, Be Afraid of NOT Doing It

This might sound difficult to achieve, but when it came to talking to girls on the street, it happened quite quickly. I was pretty much always nervous starting a conversation, but that fear started to balk in comparison with how bad I would feel about myself if I didn’t talk to that girl.

Let me say this another way.  Say there is something you really want to do, let’s take the example of working out. If I think about going to work out, I meet with some resistance. My mind is telling me that it’s too late, too cold, too whatever. So I don’t do it.

What happens next is interesting. If you feel horrible because you didn’t work out, the chances that you will be compelled to work out next time will be higher.

So, with talking to girls, I started to become more afraid of my self-talk after not talking to a girl than I did about the fear of rejection that I might get while talking to her. This was like the tilt in the pinball machine.

Even though on occasion I would lead myself astray in the wrong direction – i.e. not talking to the particular girl that I wanted to talk to – the gravity of being afraid not to talk to the girl was eventually stronger.

I eventually ended up talking to whoever I wanted to meet every single time.

Lesson 3: The Best Results Came When I Wasn’t Trying

Initially, I was trying really, really hard. I wanted to go on dates with a ton of girls. Every conversation had a pretty obvious agenda.

What happened eventually, though, was very interesting. After overcoming the initial inertia that stopped me from talking to girls at all, and after settling into my new “habit”, I started having less of an agenda. I wasn’t talking to girls to take them on dates.  I was talking to them to talk to them!

Also, a funny thing happened: Girls started asking me on dates! I’m not making this up. I don’t know if it was good karma, or if they could just sense a sort of confidence that came with not trying. Also, funnily enough, the coolest girls that I met were actually ones that approached me (not on the street, but after yoga class and after meditation).

These were the girls I eventually had the biggest connection with and ended updating.

Side note: I didn’t have any particularly great relationships with the girls that I met on the street. I always ended up hitting it off more with ones that I met doing some sort of activity that we had in common. The hard advice, though?  Everything I learned about connecting with the cool girls that I did meet came from meeting girls on the street.

Lesson 4: It’s Not a Cliché: Put Yourself Out There

This is as simple as advice comes, but no one talks about it as much as they should.  You have to fail. And to fail, you have to try. You can read this a thousand times.

You can repeat this to yourself all day, and it won’t mean a damn thing. Until you realize that the more you get back on the horse, the better you will be, this is just mental gymnastics.

Lesson 5: This Will Be Useful For The Rest Of My Life

You know if you learn how to cook a really awesome dish, say ratatouille, it takes some initial investment. Maybe you make a couple of trash dishes. But you do it a few times, and BAM, you now have ratatouille under your belt anytime you need to make a nice meal for a group of people.

The same applies here.  What took two months of hard-fought effort has rippled into my life even three years after those hectic two months.

I don’t approach every girl in the street anymore. Not even close. But can I confidently start a conversation with a gorgeous girl at a café?  Yes.

Do I still get nervous? Sure. But that doesn’t bother me anymore. And that means I’m going in the right direction 🙂

Best of luck to you man,

I help men evolve into a person they want to become by giving them a personalized roadmap to success.